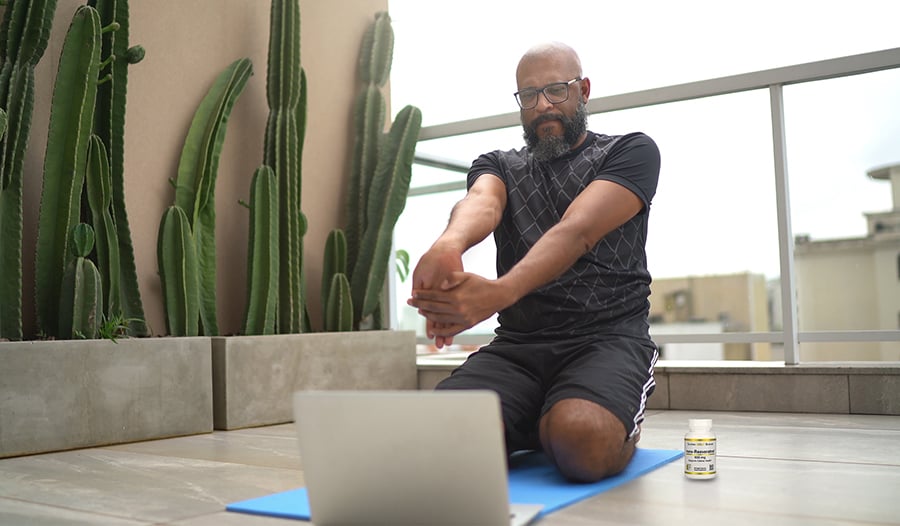 Autophagy is the cell's quality control process to dispose of cellular garbage, debris, microorganisms, and unwanted compounds. During this cleaning process, accumulated waste products are delivered to a compartment in cells known as lysosomes so that they can be destroyed and potentially reused.

The science and importance of autophagy is a relatively new discovery. In 2016, Yoshinori Ohsumi won the 2016 Nobel Prize in Physiology or Medicine for his discoveries of the mechanisms for autophagy.

Enhanced autophagy has been found in exceptionally healthy centenarian humans and appears to be a key target for living a healthier, longer life. Genetics plays a role in autophagy, but diet, lifestyle, and dietary supplements can considerably influence the expression of autophagy genes as well.

Before highlighting how to enhance autophagy specifically, it is important to point out again that impaired autophagy can have several consequences. For example, an increase in oxidative damage, loss of control in protein building and breakdown, decreased mitochondrial function, a decline in immune function, and other issues associated with an increased rate of cellular aging. These effects hit every tissue of the body, especially the brain, since it is the most metabolically active tissue. Age-related decline in autophagy is also responsible for sarcopenia—the progressive loss of muscle mass and strength associated with aging.1

One of the keys to helping your body's ability to deal with cellular debris is to prevent its formation and accumulation in the first place. Accelerated human aging is characterized by a state of chronic, low-grade inflammation. This process is referred to as inflammaging, and that inflammation also leads to reduced autophagy.2

A few triggers of inflammaging include poor blood sugar control and a lack of vital dietary factors that fight inflammation. Inflammation fighting foods include omega-3 fatty acids, polyphenol-rich fruit, and carotenoid-rich vegetables.3 With inflammaging, mitochondrial function is reduced primarily because of damage and stress caused by free radicals and pro-oxidants. The mitochondria are the compartment in cells that create the energy currency of our body – adenosine triphosphate (ATP). And a decrease in mitochondrial function is another factor that leads to reduced autophagy.

Typically, as people age, there is a decline in mitochondrial numbers and function. This leads to decreased energy (ATP) production, leading to the leakage of inflammatory compounds from mitochondria and a more significant formation of cellular garbage within the cell itself. Hence, the term "garb-aging" is used to describe the effects of excess accumulation of cellular garbage, reduced autophagy, or both.2

How to Support Autophagy

To prevent garb-aging and preserve autophagy, you must reduce the formation of excessive cellular garbage and support mitochondrial function.5 Here are some of the critical steps to help these goals:

The expression of ATG5 is reduced in response to oxidative and free radical damage and reduced mitochondrial function. Hence, the recommendations above are essential to enhancing autophagy for those reasons.

One of the vital dietary factors linked to enhanced autophagy is spermidine.7 As its name suggests, spermidine was first discovered as crystals seen under a microscope in a sample of human semen in 1678 by the famous Dutch scientist Anton Van Leeuwenhoek, commonly known as "the Father of Microbiology." Not surprisingly, spermidine is very important to sperm function, but it also plays a significant role in cells throughout the body.

Spermidine can bind to and activate critical molecules involved in cell growth, genetic expression, and protein synthesis. Spermidine also plays a significant role in regulating the immune response and the antioxidant system.

Spermidine helps fight cellular aging via several mechanisms. It exerts significant antioxidant activity, especially in protecting membrane lipids and nucleic acids. But it is spermidine's role as an enhancer of autophagy and mitochondrial function that produces substantial anti-aging effects.7

In addition to dietary sources, spermidine can be manufactured from the amino acid ornithine in the human body. Still, tissue concentrations decline with age, primarily due to a decline in the activities of spermidine-synthesizing enzymes. A higher spermidine intake is linked to a lower overall mortality rate, including reduced mortality from cancer and cardiovascular disease.8-10 Spermidine also shows promise in protecting against the effects of aging on the brain, improving liver function and overall metabolism, and protecting against intervertebral disk degeneration.

The dietary intake of spermidine varies considerably based on the intake of polyamine-rich foods. The estimated daily spermidine intake for adults in the United States and Europe is approximately 12.5 mg per day. Three tablespoons of wheat germ provide around 5 mg of spermidine, or about 40% of the typical daily intake.

There have been several clinical trials with wheat germ or wheat germ extracts in elderly patients with declining memory and cognitive function.10-13 For example, one double-blind study focused on the effect of wheat germ intake on 85 subjects between 60 and 96 years old from 6 nursing homes.13 One group received a grain roll (roll A) with wheat germ, with each roll A providing 3.3 mg of spermidine. The second group received rolls baked with wheat bran instead of wheat germ (roll B) that provided 1.9 mg of spermidine per role. In addition to memory tests, blood samples were taken to measure spermidine levels in the blood. Results demonstrated a clear link between the intake of spermidine, blood levels of spermidine, and improved cognitive performance and memory. Based on the results and blood measurements, the minimum daily dosage of spermidine required to show improvement was 3.3 mg (roughly two tablespoons of wheat germ).

Vitamin D3, fish oils rich in omega-3 fatty acids, and plant-based antioxidants such as resveratrol, grape seed extract, curcumin, NAC, and CoQ10 all enhance autophagy. Below is more information on resveratrol and nicotinamide mononucleotide, as these two dietary supplements have gained significant popularity as autophagy enhancers and work very well together.

Resveratrol is a polyphenol compound found in low dosages in grapes (only in the skin), red wine, peanuts, and blueberries. Most resveratrol supplements use Japanese knotweed (Polygonum cuspidatum) as the source.

Several clinical studies have shown that the tremendous anti-aging effects of resveratrol produced in animal studies translate to humans as well.16,17 In particular, resveratrol lowers markers of brain inflammation associated with aging and poor mental function in older adults. As a result, resveratrol improved mood, mental cognition, and scores on measures of activities of daily living in older adults. In other words, it helped them act and feel younger. Improved autophagy is likely one of the key reasons. And it does so safely and without side effects.

Nicotinamide mononucleotide is a unique form of vitamin B3 that exerts beneficial effects in increasing the levels of nicotinamide adenine dinucleotide (NAD+), an essential compound in energy production and many cellular processes.18,19 Since NAD+ levels drop with aging even with adequate intake of other forms of vitamin B3, restoring depleted NAD+ levels with nicotinamide mononucleotide is also emerging as part of an anti-aging as well as a cellular health-promoting strategy. Low levels of NAD+ in our cells and throughout the body can lead to: 20,21

Many of these issues may be the result of impaired autophagy.

This article was written by Dr. Michael Murray, iHerb's Chief Scientific Advisor. For over three decades, Dr. Murray has been a thought leader, author, and expert in nutrition, dietary supplements, and natural products. He has published more than 30 books, including the bestselling Encyclopedia of Natural Medicine, now in its fifth edition, which has been used by over 100,000 health care professionals across the globe. Learn more about him on DoctorMurray.com or his iHerb Page.

Autophagy—Your Cells’ Natural Housekeeping Process: What It Is and Why It Matters

2,778 Views
Autophagy—your brain’s way of detoxing—is essential for thinking, communicating, and moving. Learn how to promote autophagy to keep your brain and organs healthy.

How to Improve Liver Health Naturally

104,684 Views
If you’ve been exploring ways to improve your health—perhaps wanting to get rid of brain fog, sluggishness, or excess weight—you’ve likely come across the concept of a liver cleanse, also known as a liver detox.

29,601 Views
Improve the health of the body and brain by fasting, exercising, following a healthy diet, and supplementing with turmeric, bacopa, and more.