Which Foods Are High In Vitamin D?

Vitamin D is a fat-soluble vitamin that serves many vital functions in the body. It’s a unique nutrient in that we get it from food sources but it’s also something that our bodies make. In fact, there are three ways that we can get vitamin D—from the sun, from food, and from vitamin D supplements.

Exposure to ultraviolet rays triggers the conversion of cholesterol in our skin to vitamin D3, a form of vitamin D. D3 then enters the blood and is transported to the liver and kidneys where it is converted to its bioactive form (calcitriol). Because our bodies make vitamin D naturally from sun exposure to the skin, it is often referred to as the Sunshine Vitamin.

‌‌‌‌What Does Vitamin D Do In The Body?

Most of us recognize vitamin D as being important for bone growth, which it certainly is. Vitamin D aids in the absorption of calcium, helping to form and maintain strong bones. When you don’t get enough vitamin D, it puts you at risk for diseases such as rickets in children and osteomalacia in adults. That’s why the US government started fortifying milk with vitamin D in the 1930s—rickets was a major health problem at the time.

But vitamin D is not just critical for healthy bones—it actually has several other important functions in the body including keeping your muscles, nerves, and immune system healthy and modulating proper cell growth. Also, it may decrease the risk of certain types of autoimmune diseases such as multiple sclerosis and offers protection against diabetes, cardiovascular disease, dementia, and certain types of cancer. However, much of this evidence has come from observational studies so more interventional studies on vitamin D supplementation need to be done to determine vitamin D’s role in these diseases.

‌‌‌‌How Much Vitamin D Do You Need?

Currently, there is a lot of scientific debate over what the optimal amount of vitamin D is. The official Recommended Dietary Allowance (RDA) set by the Institute of Medicine (IOM) is 600 International Units (IU) per day for adults aged 19-70 years and 800 IU for those over age 70. The RDA provides the daily amount needed to maintain healthy bones and normal calcium metabolism in healthy people and is based on minimal sun exposure. But many groups recommend much larger amounts of vitamin D based on the most current research. For example, the Endocrine Society recommends as much as 1,500 IU to 2,000 IU per day to achieve adequate serum levels of vitamin D.

‌‌‌‌What Are The Signs and Symptoms of Vitamin D Deficiency?

What are the best ways to get an adequate amount of vitamin D? One way is through exposure to sunlight. Just 10-15 minutes of sunlight exposure can provide 3,000-20,000 IU. The problem is that the amount of vitamin D we get from sun exposure varies considerably depending on several factors including geographic latitude and skin color. Sunlight is generally weaker in northern latitudes, leading to less vitamin D synthesis. Also, people with darker skin tones generally need a lot more sun exposure to synthesize vitamin D, as melanin reduces the skin’s ability to produce vitamin D from sunlight.

Vitamin D deficiency has reemerged as a global health concern. About one billion people worldwide have vitamin D deficiency. Some experts believe that low intake of the vitamin coupled with behaviors that limit UV-light exposure (such as time spent indoors, the use of sunscreen, and the use of protective clothing to fully cover the skin) have resulted in widespread inadequate vitamin D status. Elderly people and individuals who are hospitalized or reside in nursing homes are especially at risk. Not only do many of them have inadequate sun exposure, but they also may have limited dietary intake and/or impaired kidney function, which limits the conversion of vitamin D to its active form.

A 3-ounce serving of rainbow trout provides 645 IU of vitamin D, which is more than 100 percent of your daily requirement. Fresh salmon ranges from 383-570 IU per three ounces depending on the type of salmon. Some studies show that wild salmon may contain much higher amounts of vitamin D than farmed. Other fresh fish that are high in vitamin D are halibut, carp, swordfish, and catfish.

Canned fish also have high amounts of vitamin D, so if fresh seafood isn’t an option then try canned, which is typically also less expensive. Three ounces of canned light tuna in water contains around 154 IU of vitamin D.

Canned tuna does contain methylmercury, a toxin found in many types of fish. However, certain types of tuna, such as light tuna, pose a lower risk. It’s considered safe to eat up to six ounces of canned tuna per week.

Three ounces of canned sardines in oil contains 164 IU of vitamin D. Pickled herring is also a good source of the vitamin but can contain high amounts of sodium.

Cod liver oil is extracted from the liver of codfishes. Historically, it was used widely beginning in the 1920s to prevent and treat rickets. One tablespoon of cod liver oil packs 1360 IU of vitamin D.

Except for fortified foods, mushrooms are the only natural vegetarian source of vitamin D. Similar to humans, mushrooms synthesize vitamin D when exposed to UV light. Mushrooms, however, produce a different form of the vitamin than humans—they produce D2 instead of D3.

For mushrooms that are grown in the wild, the synthesis of vitamin D occurs naturally from the sun. In commercially grown mushrooms, this occurs with exposure to UV lamps.

Although commercially grown mushrooms are typically grown in the dark, exposing them to UV light after harvest greatly boosts their vitamin D content. A cup of cremini mushrooms exposed to UV light contains a whopping 1110 IU of vitamin D.

Eggs are a convenient way to get vitamin D and can be incorporated into a wide variety of recipes. However, keep in mind that the vitamin D in eggs is found in the yolk, not the white—so don't ditch those yolks!

One egg yolk provides about 41 IU. The USDA found that eggs contain 64% more vitamin D now than they did when they were previously analyzed by the government in 2002. This has to do with changes in the diet of chickens by egg producers such as the use of vitamin D-enriched feed. Also, free-range eggs, which come from chickens that are allowed to roam outdoors, contain substantially higher amounts of vitamin D than eggs from chickens that are kept indoors.

Fortified foods are those that have nutrients added to them that don't naturally occur in the food. Since so few foods naturally contain vitamin D, fortified foods provide most of the vitamin D found in our diet. Most cow’s milk is fortified with about 120 IU of vitamin D per cup. Milk is also an excellent source of calcium. For those who don’t drink dairy milk, plant milk alternatives (like soy, almond, and oat) are also often fortified with similar amounts of vitamin D.

Enjoying a glass of orange juice to start your days is also a good way to boost your vitamin D intake. One cup of fortified orange juice provides about 100 IU of vitamin D but varies by brand. Some cereals and instant oatmeal are also fortified with vitamin D. And if you enjoy your cereal with some fortified milk, you’re getting a double dose of vitamin D.

Yogurt is a convenient, nutrient-packed snack that provides calcium, protein, and gut-friendly probiotics. A serving of yogurt provides about 10-20% of your daily vitamin D requirement, depending on the type and brand. Tofu can be a good source of vitamin D for vegans, who may struggle to meet their vitamin D recommendations. Not all tofu is fortified but those that are offered around 100 IU per 3.5 ounces. 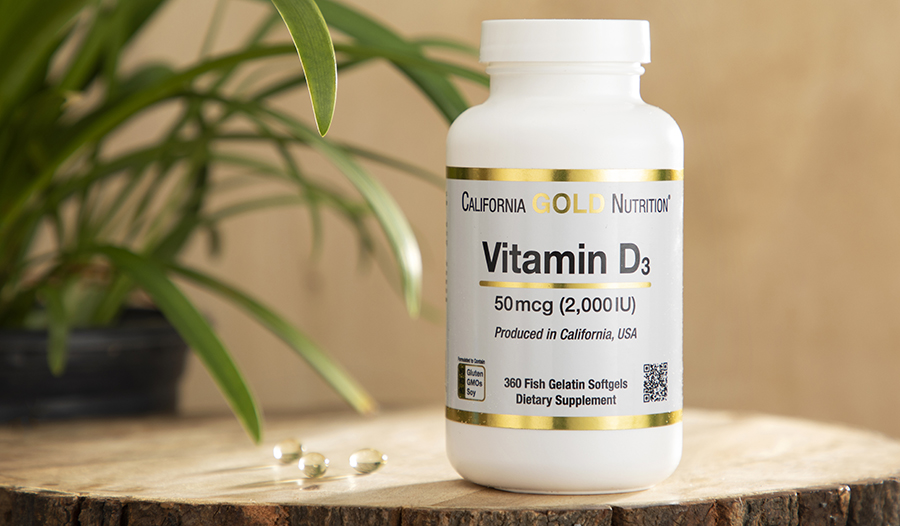 If you are concerned that you are still not getting enough vitamin D through sun exposure and food sources, you can take a vitamin D supplement. The vitamin D found in supplements comes in two different forms: vitamin D2 (ergocalciferol), which comes from plant sources, and vitamin D3 (cholecalciferol), which comes from animal sources. Both are well absorbed in the gut and increase vitamin D levels in the blood. However, most evidence indicates that vitamin D3 raises blood levels of the vitamin more and sustains those levels longer than D2.

Certain groups are at higher risk for vitamin D deficiency and should consider taking a supplement. These groups are:

Vitamin D can be harmful when amounts in the blood become too high. The Tolerable Upper Intake Level (UL) is the maximum daily intake of a nutrient that’s unlikely to cause harmful effects on health. The UL for vitamin D for adults and children ages 9+ is 4,000 IU.

When vitamin D toxicity occurs, it is typically from taking supplements. The low amounts of vitamin D found in foods are unlikely to reach a toxic level. And prolonged sun exposure is unlikely to cause toxicity because the body has inherent mechanisms to limit the amount of vitamin D it produces.

Symptoms and signs of vitamin D toxicity include nausea, vomiting, lack of appetite, constipation, weight loss, weakness, confusion, irregular heartbeat, and damage to the heart and kidneys. It is advised to not take daily vitamin D supplements containing more than 4,000 IU unless it’s under the supervision of your doctor.

This article was written by Dr. Sonali Ruder, DO, a board-certified Emergency Medicine physician, trained chef, mom, and cookbook author. She is a graduate of Brown University, Midwestern University-Chicago College of Osteopathic Medicine, and the Institute of Culinary Education. Dr. Ruder is a contributing writer, recipe developer, spokesperson, and health and wellness expert for several national magazines, cookbooks, websites, and companies. She is the founder of The Foodie Physician website and the author of several cookbooks including the Natural Pregnancy Cookbook and Natural Baby Food. Her goal is to give people the confidence and the tools to take control of their health, starting in the kitchen. Learn more thefoodiephysician.com

Which Foods Are High in Vitamin B? A Dietician's Vegan Recommendations

193,697 Views
Are you getting enough vitamin B? A vegan dietitian shares plant-based food sources of the eight B vitamins, and why you need them in your diet.

Which Foods Are High in Vitamin A?

3,883 Views
Vitamin A is a fat-soluble vitamin needed for vision, immune function, reproduction, bone health, and more. Find out which food sources are rich in this nutrient and how they can benefit health.

9,002 Views
Iron is an important nutrient, but it is also the most common deficiency worldwide. Low iron levels can cause a variety of symptoms and over time can lead to anemia. Learn where you get iron and how to know if you are deficient.